The Barracks is where the creation and removal of Infantry Units is preformed. It also gives vital information about each Infantry Unit available to the Commander. 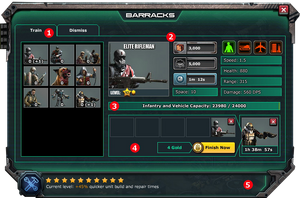 The Barracks is also where the Commander may dismiss any Infantry Unit that is not in a Platoon or Defending the Base to free up space for alternative Units both Infantry and Land Vehicles.

The Barracks Level determines the percentage of Repair and Build Time reduction for all Infantry Units. Example: Fifty-Five Level Riflemen takes 2m 45s to repair with a Level 1 Barracks. The same Units with a Barracks Level 10 only take 1m 31s to repair due to the 45% reduction in Repair Times afforded to that Level of Barracks. 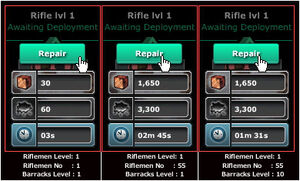 War Production is the ability to produce and spawn spacific units to aid in Defense while the base is under attack.

Barracks With Promoting
Add a photo to this gallery

Retrieved from "https://warcommander.fandom.com/wiki/Barracks?oldid=244041"
Community content is available under CC-BY-SA unless otherwise noted.