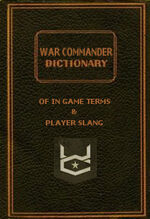 The following is a list of Definitions to Common Game Terms, Player Slang and In Chat Abbreviations.

Retrieved from "https://warcommander.fandom.com/wiki/Definition_of_Terms?oldid=241031"
Community content is available under CC-BY-SA unless otherwise noted.