War Commander puts on periodic Special Events, currently at about one per month.  During these Events the player receives Event Experience Points (eXP) which should not be confused with the separate standard Experience Points (XP) used to raise players in Rank & Levels.  The eXP can be used to Unlock and obtain Special Event Prizes which consist of special Units, Buildings, Schematics and Epic Tech that would otherwise not be available to the Player.

Information Given in Event Shop

How The Event Shop Works

The Event Shop offers sever different type of Prizes in several Categories, which may have different Rules of Availability that govern if and when they will be offered as a Previous Event Prize following their introductory Event.

Past Prizes are place in a Event Hold Period following their introductory Special Event. The length of this Hold Period can be determined by its original Prize Type and/or Prize Category.

Note : Some of these Availability Rules are explicitly stated by Kixeye and some have been derived from observation.

Some Past Event Prizes may be completely removed from the Event Shop making them unavailable to any Player who has not previously Unlocked it.  This however does not remove the Item from the game and it may still be in use by both Players and Rogue Factions.

A Full List of Past Event Prizes that have been REMOVED from the Event Shop may be found here: UNAVAILABLE

The following tables only reflects Prizes from Past Events.  Any New Prizes from a Current Event will not be added until the Events conclusion.

Indicates Items that are LAST CHANCE and will only be available until February 2015.

NOTE: PRIZES ON HOLD - Some of the following Prizes are still found in the Event Shop but they are listed as " Unavailable For This Event ".
NOTE: No Official word has been given by Kixeye on whether or not prizes not on HOLD will ever again be made available in the Event Shop.

NOTE: The following Prizes were removed from the Event Shop and are currently Unavailable. For more info see UNAVAILABLE.

Indicates Item that was intended as a Event Exclusive Prize only. 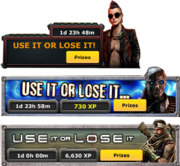 Examples of Use It Or Lose It Boxes

Example of New Prizes (1 with Requirements / 1 without )

Example of Prizes Unavailable for that Event 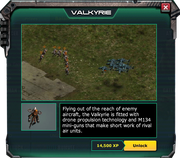 Example of Unlocked or Purchased Notice 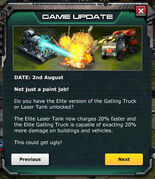 The Birth of the Elites

All Prizes Have Been Unlock!
Add a photo to this gallery

Retrieved from "https://warcommander.fandom.com/wiki/Event_Shop?oldid=172783"
Community content is available under CC-BY-SA unless otherwise noted.