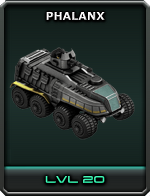 The Phalanx is a lightweight Armoured Personnel Carrier ( APC ).

The Phalanx will spawn APC Spartans as it takes damage or is destroyed. 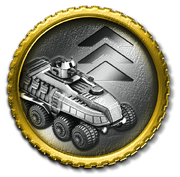 For more videos on this topic see : Phalanx Additional Video

Retrieved from "https://warcommander.fandom.com/wiki/Phalanx?oldid=233523"
Community content is available under CC-BY-SA unless otherwise noted.