Special Ops are time limited extra's that the player can employ to aid themselves in specific tasks such as Attacking a Enemy or Rogue Base, Defending the Players own Base or supplementing Looted or Collected Resources.

Once Special Op's are obtained, they may be Stored, Activated, Extended or Discarded as the Player sees fit. 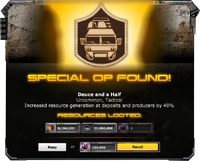 There are 3 Levels of Rarity, each signified by a different color :

There are 3 Classes of Special Ops.  These classes group the Special Ops by general function.  Each Class is designated by its Shape :

This is a period of time in which the Special Op will not function thus preventing the Special Op units from entering an Attack. This prevents the Player from starting and stopping attacks quickly and repeatedly sending in undamaged Special Op Units.

Once activated the Player may choose to extend the life of a Special Op allowing them to use it for a longer period of time.

A few Special Ops are now available for purchase with Medals in the Gear Store.

A Special Op Surge is a mini event that War Commander ran for a limited duration.  During this time period one specific rare Special Op will have its chances of winning "Dramatically Increased" when you destroy Rogue Faction Bases that follow that Surge's criteria.

Only two Special Op Surges were run shortly after the introduction of the Special Ops.

Hit Expand to View This Section

Special Ops - ingame HUD
Add a photo to this gallery 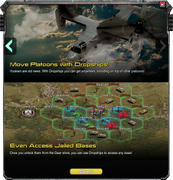 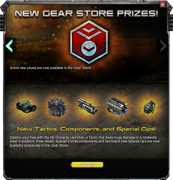 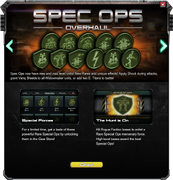 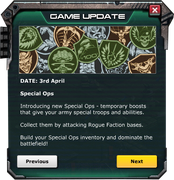 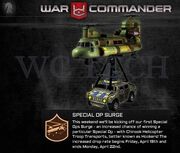 Add a photo to this gallery

Retrieved from "https://warcommander.fandom.com/wiki/Special_Ops?oldid=235733"
Community content is available under CC-BY-SA unless otherwise noted.